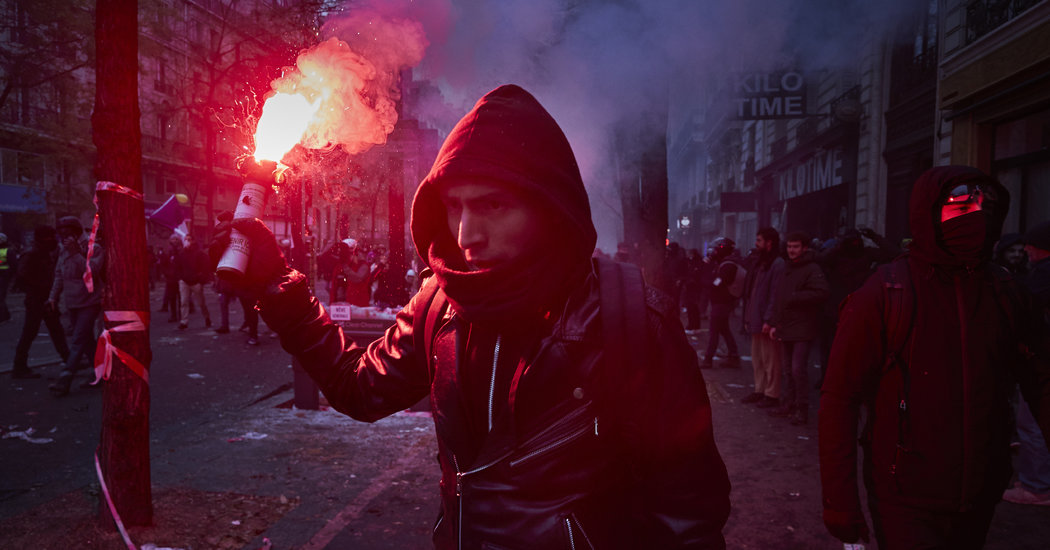 (Want to get this briefing by email? Here’s the sign-up.)

We’re covering a continuing strike in France, misogyny on Britain’s campaign trail, and outrage over a leaked video in Spain.

At a NATO summit in London this week, President Emmanuel Macron seemed to style himself as the leader of Europe, and the only continental leader who can stand up to President Trump.

But, like Mr. Trump, the French leader returned home on Thursday to a serious mess: in Mr. Macron’s case, a general strike over his plans to overhaul an overextended pension system.

The strike is expected to continue today, and perhaps into next week. It’s partly a response to Mr. Macron himself — a former investment banker with an imperious personal style — and spells big trouble for his government.

Catch up: Read our blow-by-blow coverage of yesterday’s strike, which shuttered schools and disrupted transportation across the nation.

Details: Last year’s “Yellow Vest” demonstrations were led by the marginally employed and fueled by anger over inequality and government plans to overhaul France’s generous social welfare system. But the current strike features many unionized workers, including teachers, hospital workers and some civil servants.

Quotable: “It is the other France that is revolting today,” said Daniel Cohen, an economist at France’s top-ranked École Normale Supérieure.

Will Ukraine cave to Putin in peace talks?

President Volodymyr Zelensky of Ukraine is scheduled to meet President Vladimir V. Putin of Russia on Monday for talks on ending a grinding war with Russian-backed separatists along his country’s eastern border.

It’s a key inflection point for Mr. Zelensky, who campaigned for the presidency partly on a promise to end the war. Post-independence Ukraine has tilted from pro-Western to pro-Russian governments, and there are sharp divides there over how to deal with Russia.

What to expect: Russia, which is widely despised by Ukrainians outside the country’s breakaway eastern territories, is expected to seek to trade away de facto control over two separatist zones. In return, the country is seeking influence in Ukrainian politics, including a veto on membership in the North Atlantic Treaty Organization.

Voices: Mr. Zelensky’s critics say that without clear American diplomatic backing, he may be too willing to make concessions to Moscow. Doing so would weaken him politically and hamper his ability to follow through with an anticorruption campaign.

U.S. impeachment inquiry: Nancy Pelosi, the speaker of the U.S. House of Representatives, called on her colleagues to begin drafting articles of impeachment against President Trump. She said the inquiry shows that he violated his oath of office by pressing Ukraine for help in the 2020 election.

The roots of Italy’s anti-migrant rage

Public rage over immigration is a common explanation for why the League — an anti-migrant party in Italy that has threatened to drastically reorient the country’s place in Europe — has gained political support. And that’s clearly a major factor.

Yet the foundations for the League’s rise were laid decades ago, as Italian textile towns were upended by global economic forces, especially competition from China. To understand this, our business correspondents visited a Tuscan city with shuttered textile mills and a population of Chinese immigrants.

Details: Italy has proved especially vulnerable to competition from China because many of its artisanal trades have long been dominated by small, family-run operations that are now unable to compete with Chinese factories.

Context: The League was sidelined from a new government that formed this year. But it’s poised to lead whenever national elections are held again — by 2023, and perhaps earlier.

A climate of fear for Britain’s female candidates

Death threats. Inconspicuous offices. No canvassing after dark. This is life on the campaign trail for female candidates ahead of Britain’s Dec. 12 election.

The campaign has turned particularly nasty as the Labour and Conservative parties hurl blame and trade allegations of racism and wrongdoing. Anger and exhaustion over Brexit only adds to the rancor.

One apparent result is that candidates, particularly women, face a torrent of abuse and threats from across the political spectrum — all as the 2016 murder of Jo Cox, a Labour lawmaker, looms overhead.

Quotable: “The sad thing is, you deal with it on a daily basis so you are probably not shocked anymore and you accept it,” said Andrea Jenkyns, a Conservative lawmaker running in a constituency outside Leeds. “And what kind of society is that?”

Today: The BBC will host another televised debate between Jeremy Corbyn and Boris Johnson, a day after one of the broadcaster’s presenters challenged Mr. Johnson to sit for an interview before the election.

Portrait: Interviews with people familiar with the 28-year-old extremist behind last week’s London Bridge attack show that the problems of rehabilitating radical jihadis are complex.

If you have some time this weekend, this is worth it

Holding death in her hands

No country has more liberal laws for doctor-assisted death than Belgium, where 2,357 patients died by euthanasia in 2018.

But when the champion Paralympian Marieke Vervoort, above, obtained a doctor’s preliminary approval to end her life, her parents were philosophically uncomfortable with the idea. Even her doctor said that she did not quite seem ready to follow through — and she agreed.

Two Times journalists spent three years reporting on Vervoort as she wrestled with an agonizing decision. “We cry a lot,” she said of her family. “It’s not natural for parents to give their daughter away first.”

Here’s what else is happening

Saudi Aramco: Ahead of what may be the biggest I.P.O. ever, the world’s largest oil company set a price for its shares, $25.6 billion, marking its value at $1.7 trillion. Trading on the Riyadh stock market is expected to begin next week.

Migrants: At least 58 people have drowned after a boat that left Gambia last month capsized while approaching Mauritania to refuel and stock up on supplies, the U.N. said. A search for survivors continued on Thursday.

Spain: Outrage erupted after a leaked video showed that the staff of a reality television show filmed the sexual assault of a contestant, then forced her to watch it in order to film her pained reaction.

Snapshot: Above, in London, a sad-looking Christmas tree in Trafalgar Square. The 79-foot fir, a present from Norway, is the talk of the town — and not in a good way.

Italian food in Paris: The French capital is a hub for experimental aperitivo bars, pizza labs and other trendy Italian establishments.

Cook: Peppermint stripe cookies are among our 12 stunning recipes for Christmas.

Listen: Gaye Su Akyol, a Turkish rock star, built a broad fan base by reviving psychedelic rock — and reinventing it to focus on social commentary. “The whole country is a hookah cafe, we are suffocating in its smoke,” she sings.

Smarter Living: One thing you can do for the environment is use smarter holiday lights.

And now for the Back Story on …

The Trump administration recognized Jerusalem as Israel’s capital two years ago today. We asked our Jerusalem bureau chief, David M. Halbfinger, how that has played out.

Little has changed as a direct result; other countries have hardly lined up to follow suit. But the announcement now almost seems quaint.

The Palestinians now will have nothing to do with the Trump administration as a mediator. But their reasons for that could take up another book of the Bible.

That’s it for this briefing. See you next time.

Thank you
To Mark Josephson and Eleanor Stanford for the break from the news. You can reach the team at [email protected]

P.S.
• We’re listening to “The Daily.” Our latest episode is about the U.S. effort to close its education gap with the rest of the world.
• Here’s today’s Mini Crossword puzzle, and a clue: Replies to an invite (five letters). You can find all our puzzles here.
• “Smarter Living,” a new book based on the popular Times section, is now available for purchase.