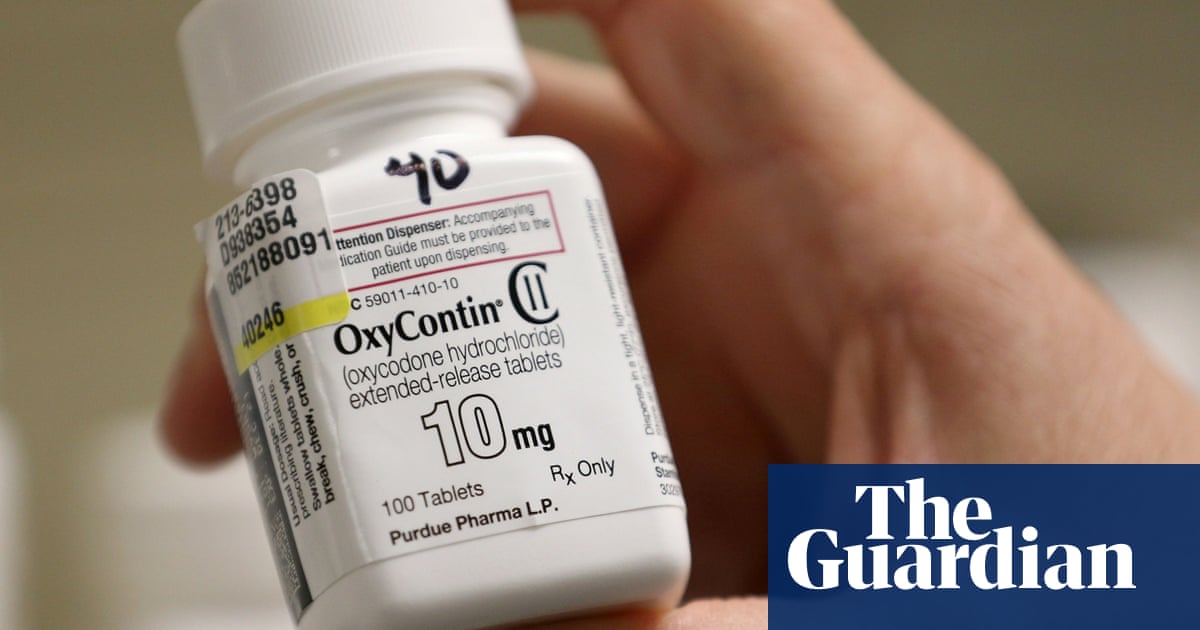 The wealthy owners of OxyContin maker Purdue Pharma started taking far more money out of the company after it was fined for misleading marketing of the powerful prescription painkiller.

Purdue made payments for the benefit of members of the Sackler family totalling $10.7bn (£8bn) from 2008 through to 2017, a court filing made by the company on Monday evening shows.

That includes taxes and other payments. Family members received $4.1bn in cash over that period. By contrast, distributions for the benefit of family members from 1995 to 2007 totalled $1.3bn.

The total amount family members received from the company was made public in a filing in October, but the new report offers new details on when the money was distributed.

“Today’s report confirms what we revealed in our lawsuit: The Sacklers pocketed billions of dollars from Purdue while thousands of people died from their addictive drugs. This is the very definition of ill-gotten gains,” the Massachusetts attorney general, Maura Healey, the first attorney general to sue Sackler family members, said in a statement.

The Sacklers’ wealth has received intense scrutiny from Healey and 23 other state’s attorneys general who are objecting to a plan to settle some 2,700 lawsuits against Purdue over the toll of opioids, including those filed by nearly every state.

The objecting attorneys general say that the settlement does not do enough to hold the family accountable for an opioid crisis linked to more than 400,000 deaths in the US since 2000. The settlement calls for the family to contribute at least $3bn in cash over time and give up control of the company. In all, the plan could be worth up to $12bn over time.

But the offer comes with a major catch: the company says the family may back out if lawsuits against family members are allowed to move ahead. They’re all on hold for now as the company’s settlement efforts play out in bankruptcy court.

In a statement on Monday, Daniel Connolly, a lawyer for one branch of the Sackler family, said it was not helpful to argue over how much family members received. “The Sackler family hopes to reach a productive resolution where they contribute Purdue for the public benefit and provide at least $3bn of additional money to help communities and people who need help now,” he said, “which makes more sense for everyone than continuing litigation that only squander resources”.

The report by consultant Alix Partners included in a court filing on Monday gives the most detail to date on how much the family benefited from Purdue.

The company said in a statement that it is providing “this exceedingly rare level of transparency to help ensure that all claimants, including attorneys general and the communities they represent, can support the settlement structure that would transfer more than $10bn of value to the American public to address the opioid epidemic and save lives.”

The report shows the Sackler payments jumped beginning in 2008 — the year after Purdue agreed to pay a federal fine of $635 million for misleading the public about OxyContin’s addiction risks.

Federal data made public earlier this year showed that OxyContin sales grew even after the fine. And the death toll from opioids, a class of drug that includes prescription painkillers as well as heroin and illicitly made fentanyl, rose, too, peaking in 2017.

The family, listed by Forbes magazine in 2013 as one the nation’s 20 wealthiest, has stopped taking distributions from Purdue.

The filing shows the company kept paying family legal bills until early this year. From 2016 until the end of February this year, the company paid $17.6m in Sackler legal bills, with nearly half that amount coming in 2019 as lawsuits mounted.

While Sackler family members remain the Stamford, Connecticut-based company’s owners, none are now on its board of directors. Vascepa was approved years ago for people with sky-high triglycerides, a type of fat in blood. The Food and Drug Administration allowed its use in a far bigger group of adults with high, but less extreme, triglyceride levels who have multiple risk factors such as heart disease and diabetes.

In patient testing, it reduced risks of potentially deadly complications including heart attacks and strokes about 25 percent.

Amarin, the drug’s maker, set a list price of $303.65 per month. What patients pay will vary by insurance, and Amarin said it will offer financial help.

The Irish drugmaker estimates the new approval makes Vascepa, which is pronounced vas-EE’-puh and also is called icosapent ethyl, appropriate for up to 15 million U.S. patients.

High triglycerides can clog arteries and boost chances of developing heart disease, suffering heart attacks or strokes, needing a bypass or artery-clearing procedure, or being hospitalized for chest pain — just like high cholesterol and elevated blood pressure can do.

Amarin funded a five-year study of nearly 8,200 patients at high cardiac risk who were already taking medicines to lower bad cholesterol or control diabetes. The half who took Vascepa capsules along with those medicines had a 25 percent lower chance of heart complications and a 20 percent lower risk of death, compared with those adding dummy capsules of mineral oil to their medicines.

Slightly more patients getting Amarin’s drug had an irregular heartbeat than those taking the dummy capsules, but other side effects were minor.

Heart disease affects an estimated 121 million American adults, causes about one in three deaths and costs more than $500 billion annually for treatment, according to the American Heart Association. Millions of Americans take nonprescription supplements of fish oil, also called omega-3 fatty acids, for their supposed heart benefits, but their dosages are far below Vascepa’s potency.

EL PASO, Texas — A Texas woman who went missing after going on a date in July was killed, and a man has been arrested in her death, police said Wednesday.

El Paso police said the body of Erika Andrea Gaytan, 29, has not been recovered. She was last heard from July 13 after going to a concert.

“Her body has not been found, but based on forensic and other evidence gathered over the course of the investigation detectives have reason to believe that she is deceased and was the victim of a murder,” police spokesman Enrique Carrillo said in a statement.

Ricardo Marquez, 28, of El Paso has been arrested and charged with her murder, Carrillo said. He is being held on $1 million bond.

Police issued a missing person alert in July describing Gaytan as “endangered.” She was last seen by her family on the day of the concert, and they reported her missing on July 16.

Gaytan’s family said when she went missing that it was not like her to go off and leave her 7-year-old son behind.

According to a police affidavit, Marquez told detectives he had taken Gaytan to his home after their date, but they argued and Gaytan used a ride-hailing app to get a lift. However, police said no such order was made from her phone.

Marquez’s phone records showed he borrowed his brother’s sport utility vehicle and a shovel from his sister the next morning. A search of Marquez’s home turned up the shovel, sand-filled shoes and plastic restraints. Surveillance video showed the SUV headed toward a desert area, then returning an hour later, according to the affidavit.

Laboratory analysis of a rear floor mat by the state crime lab revealed traces of blood determined to have come from Gaytan, the affidavit stated.

The state attorney general sued the Neptune Society on Monday, claiming the well-known company pocketed $100 million that it should have kept in reserve for those who signed up for its prepaid cremation service plans.

As a result, many of the company’s customers failed to get full refunds if they canceled their contracts, and thousands of other prepaid customers could also lose their money if they cancel, the lawsuit says.

The company also falsely claimed to use its own crematoriums when in fact it contracted with others and illegally accelerated payments when customers died, among other misleading business practices, the lawsuit says.

Beth Dombrowa, a spokeswoman for Neptune and its parent company, Texas-based Service Corp. International, said she could not immediately comment. The lawsuit also names a subsidiary, the Trident Society.

The company and its subsidiaries are North America’s largest provider of funeral, cremation and cemetery services.

The lawsuit does not say that anyone lacked the money when it came time to be cremated, only that it’s a possibility because Neptune doesn’t properly set aside the money it collects. But it says the company shortchanged customers who were entitled to full refunds if they canceled their contracts.

“Everyone dies,” begins the lawsuit, noting that in California nearly two-thirds of people choose to be cremated when the inevitable happens. Many choose to prepay for those services through companies such as Neptune.

The company is “swindling customers who were simply trying to look out for their families and prepare for one of life’s most difficult moments,” Becerra said in a statement.

The suit alleges that Neptune steered 99% of customers to its Standard Neptune Plan, which included both cremation services and related products, but then illegally kept about half the money because it was earmarked for the products.

The suit says Neptune thus deceived consumers who thought all their money was protected, as required by California law.

“Consumers should expect the money paid toward future funeral needs will be fully protected and available to pay for the necessary services when the need ultimately arises so family and loved ones are not further burdened,” Marin County Dist. Atty. Lori Frugoli said in a statement.

ANAHEIM, Calif. — Ryan Getzlaf had a goal and an assist, John Gibson made 23 saves and the Ducks ended the Islanders’ 17-game point streak with a 3-0 victory Monday night.

The Islanders hadn’t lost in regulation since Oct. 11 against Carolina, but had gone into overtime in each of their previous four games before facing Anaheim. They lost in OT against San Jose on Saturday.

The Islanders had a 16-5 advantage in shots during the first period and a 26-23 edge in the game, but couldn’t find a way to beat Gibson, who earned his first shutout of the season.

The Ducks put the game away late in the third period when Cam Fowler and Ondrej Kase scored just more than a minute apart. Anaheim ended its three-game losing streak and a five-game skid at home.

The Ducks broke through in a scoreless game at 10:28 of the opening period when Getzlaf got his stick on a rebound after Rickard Rakell’s shot from the blue line. In an attempt to clear the puck from in front, Islanders forward Jordan Eberle redirected it into his own net.

Islanders goalie Thomas Greiss made 20 saves. He was 8-0-0 during the point streak with 233 saves.

Greiss kept the Islanders in the game until the 13:13 mark of the third period when Fowler took a pass from Getzlaf, who was next to the Islanders net, and scored his fifth of the season